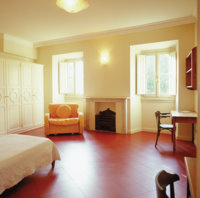 The Villa Finaly has 18 single or double standard rooms for visitors. Following the 19th century tradition, they all have en suite bathrooms and private toilets. They are spacious, with large windows overlooking the gardens. The decoration is traditional, yet they have the most modern installations: individual heating and  air-conditioning; telephone, television connection, internet connection.

Two rooms on the first floor have been specially adapted for handicapped visitors. 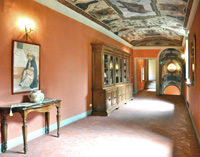 Seven historic rooms can been reached either by elevator or by a separate stairway, with grotesques painted on the ceiling. The decorations are in the style popular at the beginning of the 16th century under the influence of Raphael and his followers, which inspired numerous artists until the 19th century.

The bathrooms are all in marble, in classic colours like Siena yellow and Calacatta white, or the shade of green associated with Carrara white.