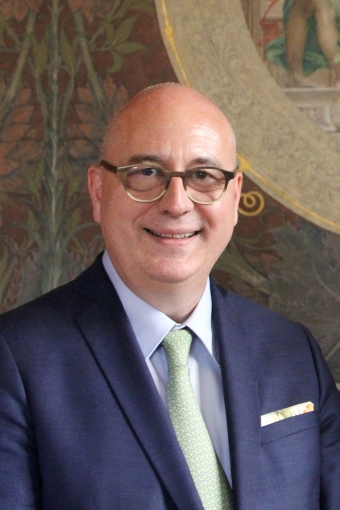 The Rectorat of the Académie de Paris is housed in the Academic Palace of the Sorbonne.

The post of Rector was created under the reign of Napoleon I with the decree dated March 17, 1808. France was divided into Academies and each one was placed under the authority of a Rector. The Academy of Paris was unique as it was directly attached to the government.

Indeed, in order, the successive Rectors of Paris were:

From 1824 to 1920, the Minister of Public Instruction, Grand Master of the University, was the Rector of the Academy of Paris. He was assisted by a Vice-Rector.

Since 1920, the Academy of Paris is no longer directly administered by the Minister but by a Rector, just like in the other Academies. The Rector is appointed by the President of the French Republic during Cabinet meetings.

After the events of May 1968, the University of Paris was divided into 13 separate universities (9 in central Paris and 4 in the Greater Paris area) with each university electing its own President. The Rector of the Academy of Paris was now to be the Chancellor of the Universities of Paris and Chairman of the Committee of Rectors of the Ile-de-France region (Paris and the surrounding area). The Rector of Paris is also Honorary President of the Conference of French Rectors.

Nowadays, the Rector is appointed by decree of the President of the French Republic, decided during Cabinet meetings. Thus, (s)he is the representative in the Academy of the Minister of Education, Higher Education and Research. The Rector of the Academy of Paris is responsible for all public education in the Academy, from nursery schools to universities, and also has authority in private education.

As a result, the Rector’s duty is to implement the decisions made at national level, duly taking into account the specificities of the academic territory.

The Rectors of Paris since 1971

The Vice-Chancellor of the Universités de Paris

The Vice-Chancellor of the Universités de Paris, who holds the rank of Rector, is appointed by decree of the French President.

In his role as Chancellor, the Rector is in charge of the coordination of the Parcoursup procedure for pupils in the Ile-de-France region who have just completed secondary education. This procedure enables them to apply for higher education courses, especially in the 16 universities of the Greater Paris area, in Classes Préparatoires (courses which prepare students for entry into the Grandes Ecoles) or in BTS courses (post-secondary vocational training courses). The Chancellor ensures that the procedure is carried out in full accordance with the law and communicates with the 8 Parisian universities. In relation to the COMUE (research and higher education centres), he plays a part in issues that concern all the Parisian higher education institutes. The Chancellor of the Parisian Universities is also in charge of the academic supervision of private higher education institutes, notably in constituting boards of examiners representing the Rectorat (educating authority) and diploma validation.  The Chancellor acts as a Government Commissioner in public interest groups (scientific foundations, thematic advanced research and scientific networks (RTRAs and RTRSs) and he is in charge of higher education personnel management. The Chancellor of the Parisian Universities initiates and monitors operations involving property and major building work at the universities. He is the Chairman of Board of Administrators of the EPAURIF (the public establishment in charge of university facilities in the Ile-de-France region).

Finally, the Chancellerie is a public institution that administers the joint estate of the universities, descendants of the old Université de Paris. In that regard too, the Rector-Chancellor is responsible for the safety and the upkeep of the Sorbonne building.

Under the authority of the Rector-Chancellor and the Vice-Chancellor of the Parisian Universities, the General Secretary of the Chancellerie administers both the Academy in all matters affecting higher education as well as those relating to both secondary and higher education, and the public establishment.

The Vice-Chancellors of the Parisian Universities since 1976

The Director of the Académie de Paris

The Director of the Académie de Paris is appointed by decree of the President of the Republic. He assists the Rector in matters relating to schools, junior and senior high schools, special education establishments, to the training and management of staff working in them, and to adult education.

The Director of the Académie de Paris is assisted by Schools Inspectors and Directors of Education at département level in the administration of primary and secondary education.

Under the authority of both the Rector and the Academy Director, the General Secretary of the Academy is in charge of administrating the Academy’s primary and secondary education in matters concerning schools, junior and senior high schools, training and management of staff working in them, and adult education.

The Directors of the Academy since 1993

The missions of the Chancellerie and its role in higher education

Paris is a university city that benefits from its strong international appeal. With a student population of 300,000, Paris is at the heart of the Ile-de-France region, which is home to 16 universities as well as to the key players in scientific research. As the fifth most important centre of research and development in the world, this “capital city region” alone accounts for 37% of public research nationally. Within this whole system, the Sorbonne plays a central part. It is home to the offices of the Rectorat of the Academy of Paris (education authority) and to the Chancellerie des Universités de Paris and houses several higher education institutes as well as research laboratories.

In his role as chief education officer for the region, the Rector-Chancellor works in the Sorbonne in the Academic Palace. He represents the Minister of Education, Higher Education and Research. The duties carried out by the Rector and the Chancellor are as old as the University of Paris itself. Since 1971, these are performed by one and the same person, the Rector-Chancellor, who is both Rector of the Academy of Paris and Chancellor of the Parisian universities. He sees to it that the state policies in relation to higher education in the Academy of Paris are duly implemented. As such, he chairs or is a member of various governing boards. He is the director of the Chancellerie, which is a public corporate body with financial autonomy and under the authority of the Minister of Higher Education.

The Chancellerie has many different missions:

Administering the property of the universities, notably their shared, joint patrimony.

As such, it administers the “Sorbonne” building, the common home of all the universities in the Île-de-France region and a national and international symbol of the French university system.

Guarantor of the Sorbonne’s brand image, which it seeks to protect and develop.

The Chancellerie is there to help develop the research reputation of the universities. And so, every year, in order to support the running of university laboratories and the work carried out by young researchers in all disciplines, it awards prizes that are financed by donations and bequests granted to the old University of Paris.