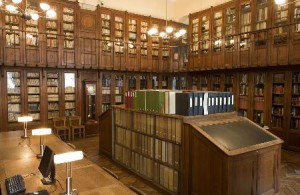 The Jacques Doucet Literary Library is a heritage library devoted to French literature from the second half of the 19th century to today. Created by the eminent fashion designer Jacques Doucet and bequeathed to the University of Paris in 1929, it has been under the authority of the Chancellerie des Universités de Paris since 1972.

A collector and patron of the arts, the fashion designer Jacques Doucet (1853-1929) started building up from 1916 an exceptional literary library whose distinctive feature is that it brings together, around single works of literature, not only rare editions but also all the documents that enable us to understand their origin and elaboration (manuscripts, corrected proofs, correspondence).

Jacques Doucet’s bequest was accepted by the University of Paris in 1932. In 1933, at the instigation of Rector Charléty, the library was moved to a room in the new reserve of the Saint-Geneviève Library and opened to the public. Since then, the Jacques Doucet Literary Library has been constantly enriched thanks to prestigious donations and acquisitions. Permission was granted for an extension in the 1960s, then another to the first floor in 1980 and later the second floor of number 8, Place du Panthéon.

The library contains the richest collection in the world of French literature from Baudelaire to the present. Apart from the Jacques Doucet collection itself, and the general collection added to it, there are also 90 collections from writers such as Mallarmé, Verlaine, Apollinaire, Reverdy, Bergson, Valéry, Mauriac, Gide, Breton, Char, Eluard, Tzara, Desnos, Leiris, Malraux, Ponge, Dupin, du Bouchet, Cioran, Ghérasim Luca, Pinget, Lyotard, Bernard Noël, to name but a few, as well as the archives of collectors or artists (painters like Derain, Picabia, Matisse, Nicolas de Staël, bookbinders like Legrain and Rose Adler, etc.). Altogether, it is estimated that there are 140,000 manuscripts, 50,000 printed books, 800 literary and poetry reviews, more than a thousand art bindings, as well as photographs, paintings, drawings, engravings and personal property.