Located right in the heart of Paris, in an exceptional setting for your ceremonies: symposiums, conferences, cocktail receptions, film shoots, etc. 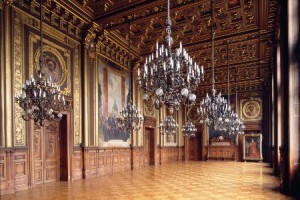 Formerly the room in which the Academic Council held its meetings, the Grand Salon is nowadays the place where official receptions take place like, for instance, the ceremony during which newly-elected members of the Académie Française receive their swords, thus marking their new status as “Immortal” defenders of the French language. It is also here that honorary degrees are bestowed. The Grand Salon is also the venue for many seminars and plays host to foreign delegations.

This vast gallery (27m x 10m x 7m) is decorated with a coffered ceiling with pendentives bearing the coats of arms of the French towns that had a lycée (high school) in 1885.

The Salon is decorated with paintings by Benjamin Constant at either end of the room:

The entrance is located at 47, Rue des Ecoles – 75005 Paris. Presence on list of names and invitation card are required for entry.

Layout of the Grand Salon at the Sorbonne