The Sorbonne in the 20th century 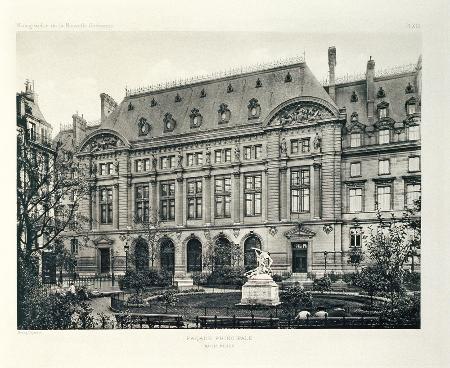 For the Sorbonne, the first half of the 20th century was an outstanding period of revival. Its researchers and teachers were in the frontline of the major scientific developments in many different fields: in history with the Ecole des Annales, in literature with the development of the science of language and comparative literature, in science with the first research in nuclear physics. Proof of the Sorbonne’s international renown and prestige can be seen with its many Nobel Prize winners (Pierre and Marie Curie, Jean Perrin, Louis de Broglie, Irène and Frédérique Joliot-Curie). Paradoxically, there were hardly any changes made to the buildings or to the administrative and teaching structures.

While World War I led to the death of a huge proportion of the student population (the extent of which is expressed by the war memorial situated in the hall of the library), it did not have much of an impact on the teaching staff whose average age meant that they were not mobilised.

After slumping during the war, the number of students started to rise again during the interwar years. It doubled between 1921 and 1926, then tripled in the 1930s, reaching a peak of 14,500 enrolled students. Two thirds of these were studying literature and there were more and more females (41%) and foreign students (30%) whose stay was made easier thanks to the opening in 1925 of the Cité Internationale Universitaire de Paris student residence in the 14th arrondissement.

World War II provoked a lasting trauma. The laws of exclusion promulgated by the Vichy Regime hit Jewish students and teachers hard. Many professors died tragically, shot or as deportees. This was the case for Marc Bloch, Georges Ascoli, Victor Basch and Louis Halbwachs in literature and also for the physicians Henri Abraham, Eugène Bloch and Georges Bruhar.

Nevertheless, the Sorbonne resumed its growth just after the war. During the “Thirty Glorious Years” (les “Trente Glorieuses”) period, in the immediate aftermath of the world conflict, the number of students rose sharply to reach 61,400 in 1965. This success did, however, have a downside. By the late 1950s, the number of students enrolled at the Sorbonne was already ten times greater than the number it had been built for a century earlier. With the democratisation of higher education, which made the influx of young people from less privileged backgrounds possible, the teaching structures and the facilities were increasingly outdated and had to be changed to adapt to the new demands of mass education. New buildings were erected in the 1950s and 1960s with, notably, the creation of the Jussieu Campus, which became home to the Science Faculty.

With these different factors, the seeds were sown for the student protest at the end of the 1960s. Since the 19th century, the Sorbonne, and notably the Arts Faculty, had always been a particularly active centre of student politics. For example, the Boulangism movement, the Dreyfus Affair and the Algerian War were all events that enabled generations of “Sorbonnards” to take up causes and helped to develop solid student associations.

And yet, the events of May 1968 did not start in the Sorbonne but rather in one of the new universities that had just been built for the very reason of responding to the boom in higher education – the University of Nanterre (just west of Paris). When the protest movement reached the Latin Quarter, the Sorbonne was itself occupied many times during the month of May and soon became an international symbol of student protest until it was evacuated for good between the 14th and the 16th of June. The reform process that was put in place just after the protest movement led to the splintering of the University of Paris into nine – later thirteen – universities. At the instigation of the Minister of Education, Edgar Faure, the blueprint law for higher education voted on the 12th of November 1968 granted limited autonomy to these new universities. Each of these institutions would now have at its head a president who was a professor elected by a board of governors.

However, this law stipulated that the administration of all of the old University of Paris’s buildings and joint property was to be the responsibility of a public institution placed under the authority of the Rector of the Academy. This institution – the Chancellerie des Universités – was given legal status and financial autonomy. It was created in 1971 and is also the owner of the Cité Internationale Universitaire de Paris student residence on the Boulevard Jourdan and of the Jacques-Doucet literary library on the Place du Panthéon. As the inheritor of property (notably from the Richelieu family) and of a tradition of excellence for which it rewards prizes and scholarships every year, the Chancellerie des Universités guarantees the academic prestige of the reputation that the Sorbonne has earned for itself over many centuries.

Great universities and prestigious schools count on this almost thousand-year-old tradition, making the Sorbonne one of the principle centres of scientific creativity and intellectual revival in the 21st century.

A temple of knowledge 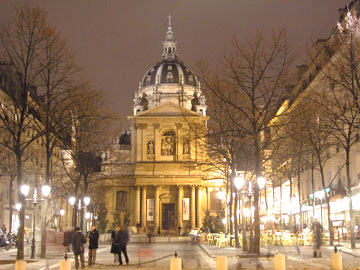 Construction of the current Sorbonne building started in 1885 and lasted until 1901. It was carried out at the instigation of Jules Ferry, Minister of Public Instruction, and under the permanent supervision of Octave Gréard, Vice-Rector of the Academy of Paris from 1879 to 1902. It is the work of the architect Henri-Paul Nénot, who succeeded in giving overall unity to this complex, eclectically-inspired construction, with its neo-Renaissance facades and classic peristyles and courtyard. Decorated with plaques bearing the names of all of the Academies in France and shields with the coats of arms of all the towns with a lycée (high school) in them, it is a veritable temple of knowledge built in the glory of the new national education system.

The Academic Palace is located to the north. This part of the building, which has housed the offices of the Rectorat (education authority) of the Academy of Paris since the 19th century, was the first to be constructed. Completed in 1889 for the centenary of the French Revolution, it is a prestige building with a grand staircase, ceremonial reception rooms, its main lecture theatre (1,700 seats initially) that is lavishly decorated with statues by Barias and Dalou and especially with the fresco by Puvis de Chavannes, Le Bois Sacré, depicting a lay virgin who embodies the Sorbonne around whom are crowding the allegorical figures of Eloquence, Science, Philosophy and History. From here, two monumental galleries lead southward. These are also decorated with evocative frescoes. One of them leads to what was the Science Faculty and the other to what was the Arts Faculty. It was not until the 1890s that the buildings dating back to Richelieu’s time were replaced with new ones. These were built around a redesigned main courtyard facing the chapel, which is all that is left of the former Sorbonne.

In the quadrangle, which is now fully occupied, there is a vast 300-seat library. There is also a lavish Salle des Doctorats (room for doctorates) which is called after Louis Liard, Jules Ferry’s Director of Higher Education at the time of the construction and who later became Vice-Rector. Finally, there is a whole series of lecture theatres that were decorated to illustrate what they were to be used for, like for archaeology or geology, which is the largest one of all and is dedicated to Richelieu, the university’s 17th century benefactor whose tomb lies in the neighbouring chapel.