The Sorbonne in the 19th century 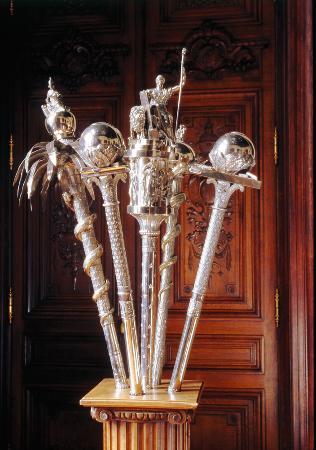 From 1806, Napoleon overhauled the whole of the French system of higher education, which was now called the Université impériale, and created five faculties in Paris whose aim was to train secondary school and seminary teachers: the faculties of science, arts, theology, law and medicine. It was in the Sorbonne that the first three of these faculties were based, as were the offices of the Rector of the Academy of Paris to which the specifically Parisian function of Grand Master of the University was adjoined. Initially, these three faculties were located in the Collège du Plessis and it was not until 1821 that they were moved to the old Sorbonne, which had been abandoned thirty years earlier.

The Faculty of Arts was very soon a success. People came to study Greek, Latin, literary history, French literature, philosophy, ancient and modern history and geography. In the Restoration period (1814-1830), the faculty was home to between 1,000 and 1,500 students per year on average and later 2,000 under the July Monarchy (1830-1848). However, the number of teachers remained limited – only 51 between 1809 and 1878 at the Faculty of Arts.

As a centre of political liberalism, the Faculty of Arts benefited from its closeness to the ruling regime under the July Monarchy. Guizot, Cousin and Villemain each held in turn the position of Minister of Public Instruction. It was at this period that the Sorbonne became the heart of the Parisian and French university system.

After the failure of many projects of reform and reconstruction during the Second Republic (1848-1852) and the Second Empire (1852-1870), the advent of the Third Republic (1870-1940) was a major turning point in the history of the Sorbonne. From the point of view of the university, the defeat to Germany in 1870 revived projects of reform supported by renowned professors such as Duruy, Taine, Renan, Monod, Boutmy, Bréal and Berthelot. Teaching then became more specialised with the creation of lectureships. While the Faculty of Theology was closed in 1885, new institutions were added to the old faculties: the Ecole Pratique des Hautes Etudes in 1868 and the Ecole des Chartes in 1897.

The University of Paris, which had no longer been a constitutional body since the Revolution, was finally recreated in 1896 with the grouping together of the five faculties, administered from the Sorbonne.

The reconstruction of the cramped, uncomfortable 17th century buildings was finally carried out at the instigation of the Minister of Public Instruction, Jules Ferry. This task was given to the architect Henri-Paul Nénot and the foundation stone of the new building was laid in 1885. Besides the construction of an Academic Palace where meetings of the education administration were held, the old 17thcentury buildings were replaced by the main courtyard and the only thing that was kept was the chapel. A vast, 300-seat library was built and it contained more than 600,000 volumes in 1913

The work was not totally completed until 1901, but the first part of the building was inaugurated in 1889, as part of the centenary celebrations of the French Revolution. From that moment, the new Sorbonne became, all over the world, the symbol of science and culture of the young French republic.

In around 1900, the university had more than one hundred professorships and as many courses taught by lecturers. The number of students fluctuated between around 3,000 (which was 42% of all those registered in the whole of France) and 4,500 just before the Great War. There were still few foreigners, but the number of young women increased from 11% in 1897 to 22% in 1906.