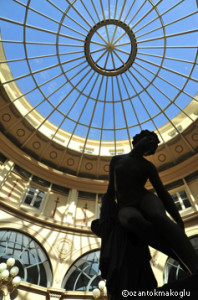 Thanks to a long tradition and to the prestige of great museums and the exhibitions that are organised in them, art history is very much present in the cultural lives of French people. And yet, for a long time France had no place to welcome and federate the whole of the scientific community in this field. It was with this aim that the Institut National d’Histoire de l’Art (INHA) was created in 2001, following a report written by the art historian André Chastel and the mission given to Michel Laclotte, honorary president of the Louvre Museum. The goal is to develop scientific activity and international cooperation in all the domains of art history. Its role is to pilot a large number of research, training and knowledge-diffusion programmes by gathering together, in the same dynamic, university researchers and curators. Thanks to its research policy, the considerable scale of its documentary resources and the quality of its courses and publications, the INHA can be considered alongside the world’s great art history institutes like the Warburg and Courtauld Institutes in London, the Center for Advanced Studies in Visual Art (CASVA) in Washington or the Zentral Institute für Kunstgeschichte in Munich.

The institute is located in the heart of Paris at 2, Rue Vivienne, in a former town house converted into a gallery in the 19th century. Its library is located nearby, at 58, Rue de Richelieu (in the Oval Room).

The INHA’s activities are centred on two departments: Library and Documentation, on the one hand, and Study and Research, on the other.

The institute has at its disposal a considerable art history and archeology library at the heart of which is the collection put together by the fashion designer Jacques Doucet (1853-1929) and to which will be added collections from two existing libraries: the Bibliothèque Centrale des Musées Nationaux (BCMN – central library of national museums), today located in the Louvre Museum, and part of the collections of the library of the Ecole Nationale Supérieure des Beaux-Arts (national college of art and architecture). Furthermore, the library of the Ecole Nationale des Chartes (a higher education institute specialising in the ancillary sciences of history) is also associated with it. A thorough inventory has been carried out and short dossier-based exhibitions (presented in the Colbert Gallery) are held. In this way, it is possible to get an idea of all that the library holds.

The institute puts in place research programmes that are designed to cater for what the scientific community needs and expects. It organises study days, symposiums, conferences and meeting-debates and it develops different resources, documentary bases and research programmes in all the domains of art history. Certain documentary bases are online on the INHA’s website (www.inha.fr), notably the one concerning the art archives of the contemporary period (GAAEL) and the first illustrated review devoted to music in France (MUSICA).

The INHA has become the centre that federates art history in France, associating universities, museums and research centres. Destined to develop and to tighten the links between the national scientific community and the researchers and international institutes working in this field, it is seen abroad as being outstandingly prestigious.