A place dedicated to student life in the capital: the Îlot Champollion

Home > The other contributions of the Chancellerie des universités de Paris > A place dedicated to student life in the capital: the Îlot Champollion 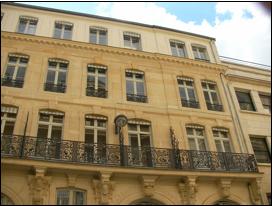 When it became apparent that there where no centres of social activity for students in the area around the Sorbonne, a project to restore the “Ilot Champollion” was initiated in the early 2000s, but it never came to anything.

It was revived in 2008 by the Chancellerie des Universités de Paris and finalised in 2009 with the help of Université Paris IV-Paris Sorbonne. The aim was three-fold :

The restoration project concerns the whole building located at 15, Rue Champollion, a part of which is on the Register of Historical Monuments, and two floors of the building at 18, Rue de la Sorbonne.

After validation of the pre-programming study, the project is now in its programming phase and the work is scheduled to be carried out over a 36-month period.